Novatec is an owner-managed, medium-sized IT company that has led customers into the digital future for the last 25 years. This starts with a requirements analysis, proceeds to architectural and process recommendations, and continues above and beyond to the agile software development phase. Their target customers are from the insurance, finance, manufacturing, automotive, and energy sectors. Together with them, Novatec explores how they can use BPM, IoT, robot-controlled process automation, mixed and augmented reality, and other innovations to improve processes and develop new products.

Novatec uses several different technologies depending on the project and the customer’s technology stack. For the backend, they mostly develop JVM-based applications and try to use Kotlin whenever possible. Projects range from a couple of applications running on premises at the customer's data center to several microservices running on public cloud providers available for millions of users around the world. 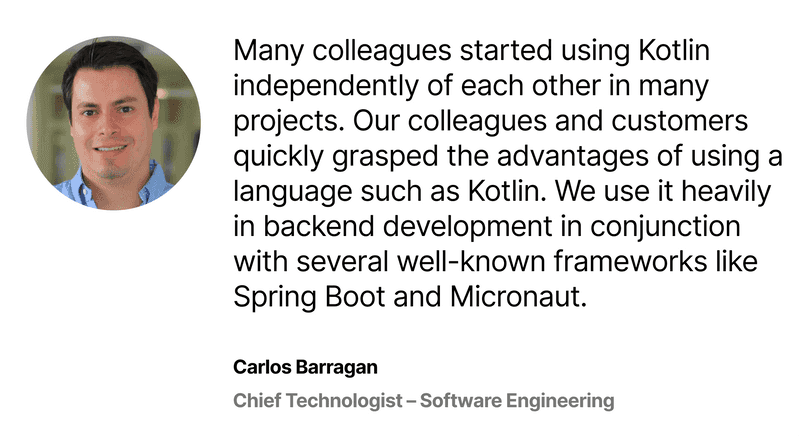 There was a common main reason why our teams introduced Kotlin into their projects: readability and conciseness compared to Java. The other reasons included:

There were several approaches to introducing Kotlin to a project. We noticed some reluctancy from our customers at the beginning. They had some fears about introducing a new language to the project, which could slow them down. That's why we started gradually with writing tests so that all team members felt comfortable with Kotlin. We neither wanted nor expected that everybody could start writing idiomatic Kotlin at the beginning. We let people familiarize themselves with the syntax and how the language looks. Then we started writing a single new application in Kotlin in order to determine how it feels for the team. After that, everyone in the team was convinced that Kotlin was the way to go. Over the next couple of months everything new was written in Kotlin and old Java code was converted / re-written every time we touched the old code.

One of the strongest advantages of Kotlin is its interoperability with Java. You can mix Java and Kotlin in the same project, so you don't need an all-or-nothing approach. It was also astounding to see that most of the team members picked up the language quickly. After a very short time, they felt they were more productive and their code became more readable and concise.

Problems regarding nullability are discovered earlier which leads to quality improvements in the codebase. Thanks to the functions provided by the standard library, there are fewer dependencies on third-party libraries. Sometimes a functional approach is more fitting for solving the problem at hand, and that is very easy to implement with Kotlin.

Kotlin won everybody over. It is simply much more efficient to code.

Do not abuse the great features Kotlin has to offer. Otherwise, the code could become cryptic and hard to understand. Use only the features that make sense and that really improve the readability of the code. Most of the time, a simple if-else is easier to read than some complicated function-chaining code.

Migration from Java to Kotlin can be done gradually, as the Kotlin interoperability with Java is great. You can mix Java and Kotlin code in the same project, so it is easy to migrate projects at a pace your team feels comfortable with. Another way to introduce Kotlin to a project is to write your unit tests with it, even if your production code is written in Java.

We also have noticed that Kotlin shines with reactive programming. The code is cleaner and more readable than with Java.

Ktor is a multiplatform toolkit built by JetBrains for creating Web applications in Kotlin. It makes use of coroutines for high scalability and offers an  easy-to-use API.

Use Kotlin with the familiar Spring framework to build powerful enterprise applications.